How It All Started

The title of this blog was inspired by one of my Spanish professor's at Miami University of Ohio, Dr. Robert Phillips, who died in the e...

Still on my own until tonight when James returns from Costa Rica, last night I used a single chicken breast to make a variation of this recipe from the New York Times Cooking page. The only significant change I made was that I didn't include the red and green peppers.

This was easy and relatively quick (the 30 minutes indicated on the recipe page was exactly accurate). It was filling, tasty, and also made enough for me to have the leftovers for dinner this evening.
Posted by YearofBooks at 8:02 AM No comments:

Stir fry with chicken and peanuts

Our child had some friends over at the beach house while visiting for Christmas. They made a meal featuring rice noodles, but didn't use them all. This New York Times recipe then appeared on my Facebook feed, and since I also had some peanuts, and still had some chives (from when I made the Dutch Baby) at the beach house it felt like kismet.

The recipe calls for ground chicken, but I had a boneless skinless breast, so I diced it up and adapted the recipe accordingly. I was also bereft of sesame oil and used olive oil instead. I added some peas just because it seemed like it needed something green. It was rather simple, and a fine, filling meal that wasn't too much work for one person.

Posted by YearofBooks at 5:47 AM No comments:

The days between Christmas and New Year's Day are slow-paced for us, and generally a time to relax. We spent a few days at our near-the-beach house and took some time to try some new dishes. Normally when we are at the beach house we have waffles for breakfast, but since we were there for four days we didn't want them all four mornings. James made them for the first two, and then I was in charge of breakfast. I found this recipe for Dutch Baby with Bacon and Runny Camembert from the New York Times Cooking pages. I don't think we'd ever had Camembert cheese before, and apparently no one at the deli counter at our local grocery store had ever even heard of it. James googled it and discovered that it was a type of brie, so he started looking around where the brie was located. This method worked and he brought home a nice 8 oz. wheel, just like the recipe called for. I followed the recipe pretty closely, with the exception that I only used seven eggs instead of eight, since that was all I had. This was both visually appealing, and really tasty. It made enough for the both of the remaining breakfasts. 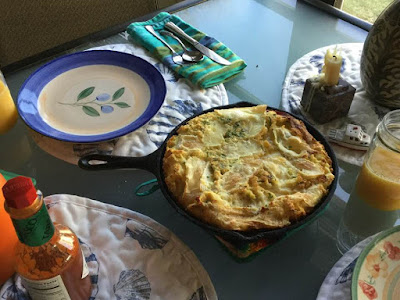 The second recipe I tried was an easy skillet dinner Cheesy Spicy Black Bean Bake. This was quick and only the skillet was needed, no additional pots, pans, or bowls. 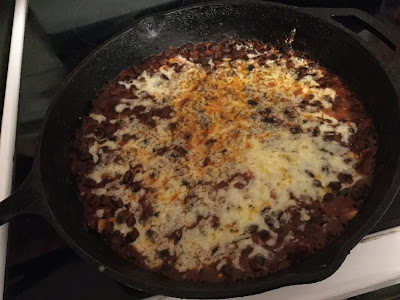 Spicy pairs well with sparkling, so we enjoyed a bottle of Blancs de Noirs from Westport Rivers Winery with this.

For the past couple years, my parents have sent the gift of cheese, from a store they like to visit in Pennsylvania. They know we have enough "stuff" and that gifts of food are always welcome. The variety of cheeses was delicious, including a salsa/jack that we put to a few good uses.

Tucked in with the cheeses was an unassuming packet of herbs and spices from Halladay's Harvest Barn in Vermont. It is labeled "Spicy Garlic Dill Dip and Cooking Blend," but dill is the first ingredient, followed by parsley, onion, garlic, and pepper. Pam made a nice dip for a holiday party, and plenty of the blend was left over in the 0.9 ounce packet, so she suggested I try making the glaze included among the recipes inside the label, because it is said to "pair well with fish."

At first, I envisioned dill with cod or haddock, but decided I would rather try it with salmon. I found a nice filet of king salmon at Kyler's Catch, which I started to grill -- skin side down -- on the cast-iron half plancha griddle in our Big Green Egg, which I had heated to about 350F. 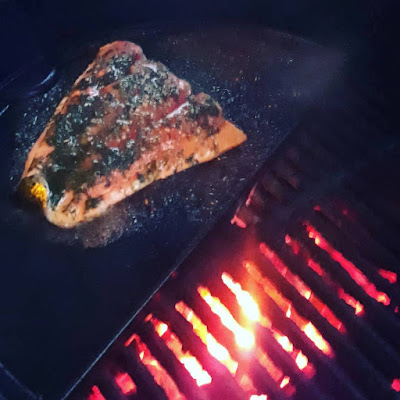 I took some liberties with proportions, whisking together 1-2T each of the herb mix, lemon juice, honey, and olive oil. I brushed it on the fish after about 5 minutes (shown above, when the fish was cooked about halfway through). I let it cook about five more minutes and then rest for a few minutes more. This was as delicious as it was easy, and we will try it again -- we still have enough mix left to do so!

Although my parents bought this mix in Pennsylvania and it is available online, I look forward to visiting the company store, located about half an hour south of our favorite Vermont B&B. It is so close to the main route, in fact, that we must have passed by its front door more than once. I look forward to learning what other concoctions are on offer there.
Posted by James Hayes-Bohanan at 8:40 AM No comments:

After I decided to make Texas/Maryland oven-fried chicken for dinner, I pulled our copy of Extending the Table from the shelf to look for a side. I soon found the perfect thing on page 145, amidst several options for making rice more interesting. I chose Mexican Rice, which is recommended specifically for serving with chicken.

The recipe calls for a "large heavy frypan" -- I need to try this in our other kitchen next time, using the biggest of our indispensable cast-iron skillets. Since I was in our weekend kitchen, I used a small stock pot instead.

I could tell that some things would need to move quickly once I started cooking, so I minced a small onion (actually half a large onion) and 7 cloves of garlic before starting. The recipe calls for 5 cloves, but my friend Joe has taught me to treat garlic quantities in recipes as minimum suggestions. I also cut a red and a green bell pepper into thin strips, and then cross-cut the strips in half. The recipe calls for two green bell peppers, but I never miss a chance to have a variety of pepper colors. Especially since Mexico is involved.

Once the vegetables were cut, I heated 2T of olive oil in the pan and then added one cup of dry rice. I stirred it constantly at med-high heat for 2 minutes and then added the onion and garlic, stirring for a couple more minutes before adding 1/2 cup of water and 1/2 teaspoon of salt. I stirred this about 5 minutes more, until the water was absorbed.

I then added another 1 cup of water (slightly more because I did not quite believe this part), the sliced peppers, and 1 cup of frozen corn. I returned it to a boil (the recipe suggests adding the water -- or optional broth -- already boiling. Once it was boiling, I lowered it to the lowest simmer and covered it -- leaving it unstirred until all the water was absorbed, just under 20 minutes -- watch this carefully!

I then removed the pot from the heat and with a spatula spread one cup of sour cream over all the rice. I topped it with about 4 ounces of freshly shredded Vermont sharp cheese. I covered the pan again to let it melt and meld for another 10 minutes before serving along with the chicken. The result: delish!

This book was published nearly 20 years ago by the Mennonite Central Committee, and is very much in the vein of the better-known More With Less Cookbook. Both are filled with simple recipes. In the case of Extending the Table, the recipes are a great introduction to global cuisines and have been thoroughly tested.

What do I mean by Texas/Maryland oven-fried chicken? Simply this: I decided that one need not choose between chili powder and Old Bay. I added generous doses of both -- along with black pepper -- to a small bowlful of flour and cornmeal. I whisked all of this together thoroughly. I then beat two eggs together with an overhand glug of Tabasco sauce and a little water.

I briefly dredged each piece of (free-range) chicken in the egg mixture and then the flour mixture and put it in a baking dishes in a 400F oven for 30 minutes before starting the rice. Once the rice was started, I checked on the chicken and decided it needed a bit of a brushing with oil. After about 75 minutes, it was spicy-crispy on the outside and moist-tender on the inside. Perfection!
Posted by James Hayes-Bohanan at 6:43 AM No comments:

This one comes from The Daily Soup Cookbook which I don't believe we've blogged about, although it does appear that we used it at least once before, judging from the cracked spine and the crumbs on the page for New England Clam Chowder. However, this time I chose a Sweet Potato Chowder recipe. This was relatively simple and I made a few substitutions on the ingredient list. The recipe called for sweet potatoes (natch) and yams. I skipped the yams and put in some carrots instead because I already had some on hand. I also used frozen corn kernels rather than corn cut from the cob.

Otherwise I followed the recipe which called for caramelizing onions with a bit of sugar, adding a bay leaf, thyme, and salt and pepper, followed by vegetable stock, and the sweet potatoes, corn, and carrots. This simmered for 20 minutes. Then I added heavy cream and removed the bay leaf before I used my immersion blender to pureé part of the chowder.

I used my trusty 22-year old bread machine to make french bread to serve with this.

A filling and tasty meal for a December night. Also made for great leftovers.


Posted by YearofBooks at 6:10 AM No comments:

The New York Times cooking page never leaves the cook with too much guessing as to what goes into a recipe. The ingredients not mentioned in the name of this dish include olive oil, salt and pepper, and Parmesan cheese. This one took a bit of work with peeling, seeding, and cubing the squash. It also created a lot of dishes to wash. We had a pan to cook the pasta, a colander to drain it, a cutting board, a plate to cool the sausage, our cast iron skillet, and the cheese grater. Not to mention the dishes we ate off of. It did turn out to be a wonderful autumnal meal with a lot of leftovers for lunch. 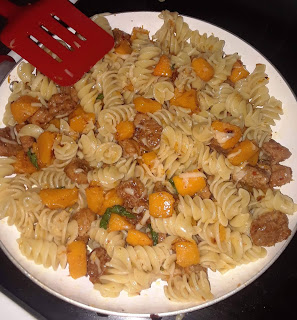 The full recipe can be found here.
Posted by YearofBooks at 12:38 PM No comments: 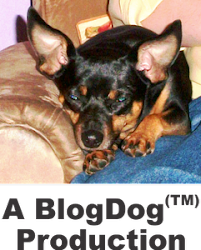